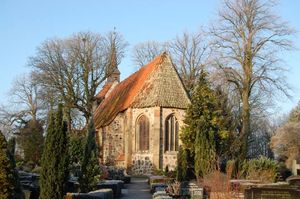 The St. Johannis Church in Kühlungsborn (formerly Brunshaupten) looks back on a 780-year history. The nuns of Parchow, a former monastery near Kröpelin, led the construction of a plain stone church. It consisted only of a rectangular nave, initially furnished with a flat wooden ceiling. The narrow slit Windows show the transitional style from Romanesque to Gothic. Around 1400 the church has been extended to include the Gothic choir and the vault. The wooden tower (in the present figure of 1680) was already 1500. This is evidenced by a small bronze bell from the year 1495, which bears a Latin inscription in addition to the number of years: O rex Gloriae, Christe, veniing sperm Pace (O King of Glory, Jesus, come with peace). From the medieval facilities are preserved the triumphal cross group and the Madonna figure. Both date from the time of 1400. The medieval altar was lost. 1707 the church received a Baroque altar, of which five figures in the choir (David, Peter, Paul, Moses and John the Baptist remained. These figures, as well as the angel, have carved the Lübeck master Bernhard Lake. The pulpit from the year 1698 comes from the Rostock champion Adam Hartig. It shows Christ as "Salvator Mundi" (Savior of the World), the four Evangelists and the disciple of John. Also noteworthy are the 42 baroque stained glass paintings in the choir windows. Indigenous families have been perpetuated by 1660 in this way. In 1963, the company Owl (Bautzen) built a new organ for this church: Church concerts Delight many visitors every year. The church is open daily from 9 a.m. to 4 p.m., except for the events. This venerable church is a visible testimony from the Christian beginnings of the place to this day. It invites you to prayer, to listen to God's word, which is said here in words, images and music.

The only evangelic church is located on the south side of the Schlossstraße, partly surrounded by old trees.

The Catholic community in Kühlungsborn is relatively young. It only existed since the end of the Second World War. Many Catholic displaced persons and resettlers came back then, especially Sudeten, Silesians and East Prussia. They found a new home in the evangelical Mecklenburg. The original worship room for the Catholic parish was in the Neue Reihe 17 (formerly Wilhelm-Pieck-Str.). This room was once a ballroom of the oldest hotel in the old village of Brunshaupten and was used until the war as such. After the war, the hotel was first one of the refugee shelters. Perhaps for the reason that most refugees were Catholics, this room then became a church and remained until the year 2000. However, there was the Holy Mass in the constant plight that for the approximately 500 Catholic Christians in the place and many holidaymakers there was no own church with enough space.

Thus, a long time ago, unimpressed by the discussion of whether a new church was available in a contemporary and a real estate in the hotel, the plan was forged to finally build a "proper" church. The gentle construction with its 18 metre high tower and well-sounding 3 bells has been finished since June 2000 and enjoys close proximity to the beach of many guests, not just devout Christians. On 23 July 2000 the church was consecrated by the Bishop Norbert Recruits (Schwerin).

The church is located at the eastern end of the Ostseeallee, just a few metres from the beach, pier and Boat Harbour. It has 270 seats (including the seats on the Organ gallery and the 60 seats in the large municipal hall). By opening a sliding wall you can enlarge the nave or the community hall at any time. In addition, two apartments for guest pastor and the Seelsorghelferin as well as a youth room were built.